Deeds: During the Spring Festival in 2020, during the special period when the whole country fought against the new coronavirus infection pneumonia epidemic, Ju Daixia resolutely withdrew her foreign trade order and returned to China to manufacture a mask production line overnight. The deeds have been reported by Xinhua News Agency, China Women's Daily, Xinhua net, Xinhua Daily Telecommunications, Junction, Litchi net and other central and provincial and municipal mainstream media. The details are as follows: 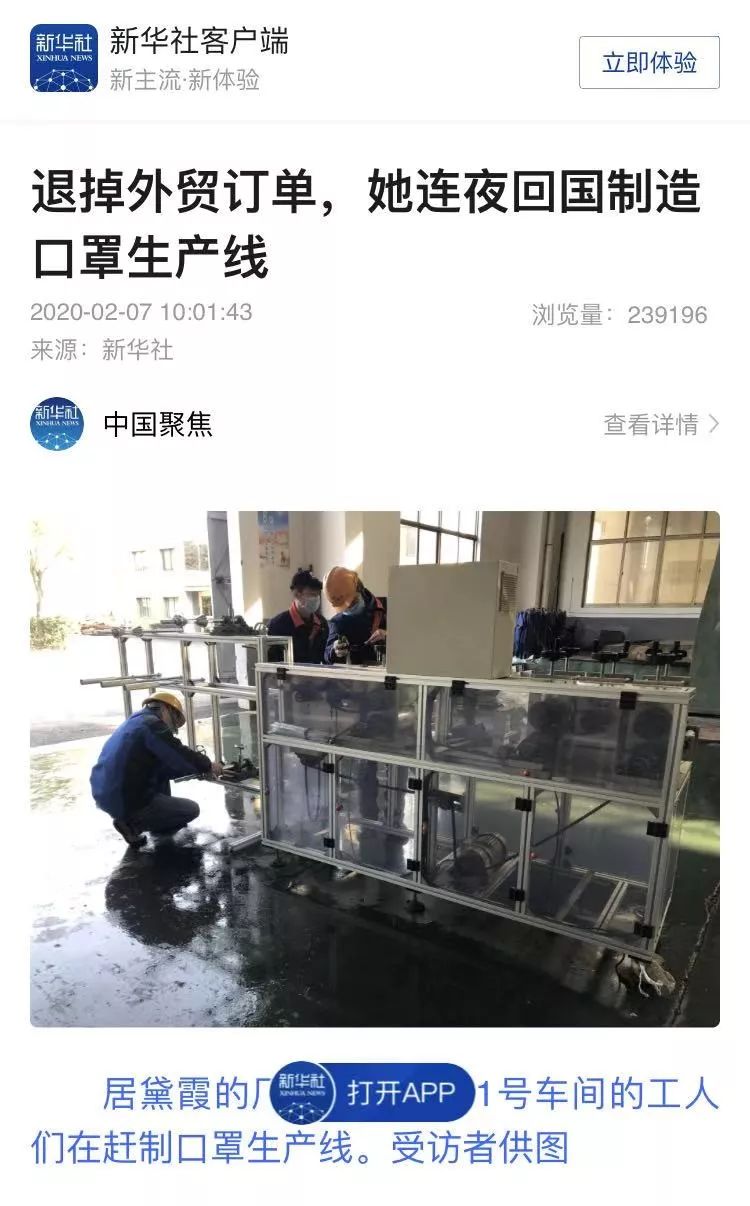 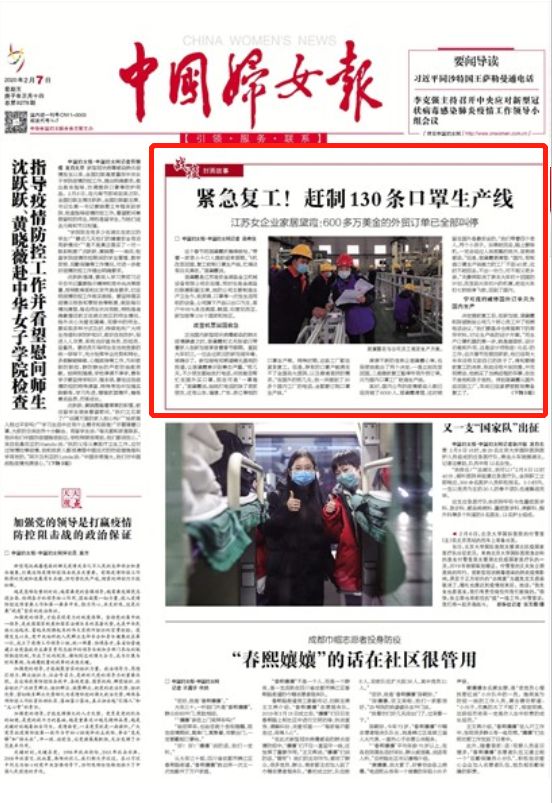 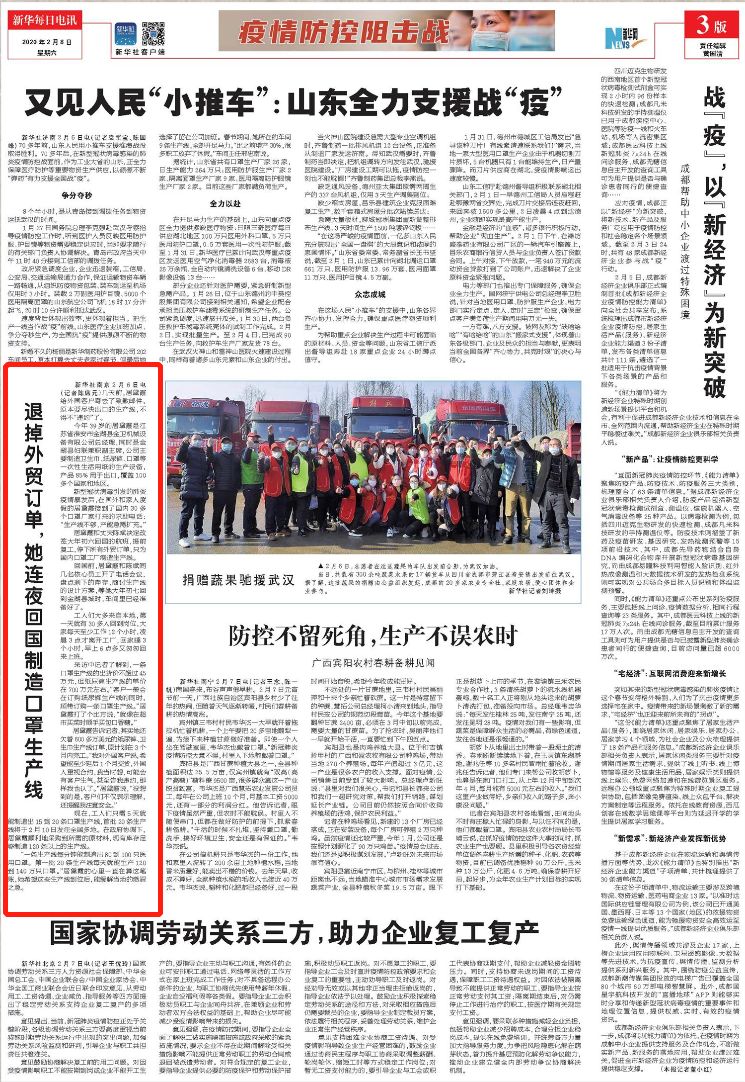 This Spring Festival tossed Ju Daixia enough, "Take a family of ten people to end the holiday in advance, change the plane back to China, resume work and rush to make mask production line, so busy day and night." Ju Daixia said.

Ju Daixia is general manager of Jiangsu JWC Machinery Co., Ltd. in Huai'an, Jiangsu, and part-time deputy chairman of Jinhu County Women's Federation. Her company mainly manufactures sanitary napkins, diapers, masks and other disposable tissues Its products are mainly exported, and 85% of its customers come from 109 countries and regions including the United States, South Korea, Indonesia, and Singapore.

Just as the pneumonia epidemic of new coronavirus infections raged in the country, Ju Daixia and her husband Chen Bin had taken their family to enjoy the Spring Festival holiday in Singapore. Until the third day of the Chinese New Year, a Chinese Singaporean who had been to Wuhan was diagnosed. The overwhelming coverage of Singapore TV channels made Ju Daixia aware of the serious situation. "In the past few days, many friends called me and asked me if I could help buy masks abroad, but now it's hard to find a mask." Ju Daixia said that in addition to her old friends, there were also mask manufacturers in Shandong, Fujian, Guangdong, Zhejiang and other places. During special periods, these factories are urgently resuming work. However, the original mask production capacity cannot meet the major hospitals and the needs of ordinary residents, "In the past few days abroad, I have received calls from more than 30 domestic factories, and I have to order mask production lines."

The continuous flow of information made Ju Daixia anxious, and prompted her to make two decisions: one was to change back to China immediately, and the other was to resume work in advance and suspend all foreign trade orders, only to build production lines for domestic mask factories.

At that time, the number of outbreaks infected in China had exceeded 6,000, and Ju Daixia knew that it was safest to stay abroad at this time. "We take four elderly people and two small children. If we rush back, if we have to change planes on the way, we will definitely pass through densely populated areas and be easily infected." However, Ju Daixia is more clear: "Domestic, has the ability to manufacture masks There are fewer than 40 factories in China, and I will not go back at this time, I will not be able to do anything, and I am sorry to my parents. " Before the first seven flights were grounded, he returned to China.

Would rather default to stop foreign orders for domestic production only

After deciding to resume work ahead of time, in Singapore, Ju Daixia and Chen Bin opened a video conference call with several core employees of the company. "We will take stock of the remaining inventory in the warehouse and discuss the design of the production line." The first step is to draw drawings, design functions and appearance. This is the job of designer Zhang Zheng (pseudonym). Before returning home this spring festival, he had not seen his child for more than half a year. In the news of resuming work ahead of time, Zhang Zheng did not hesitate for a moment. After the video conference, he bought a ticket for the return trip that evening and bid farewell to his children. By the time Ju Daixia returned to the factory from abroad, the workshop was in full swing to prepare for resumption.

The workers in Ju Daixia 's factory are mostly local people. On the first day after returning to work, more than 30 workers wore masks to work in the workshop. "At least 12 hours of shifts are needed every day. The night shift workers work harder. The temperature drops below zero centigrade at night, and there is no time to prepare heating equipment." Ju daixia fought with the workers for the first night and also froze all night. In the early morning of the next day, she went to the street and bought more than ten air heaters to the factory, which were separately placed in every corner of the workshop. On these days of returning to work, the workers leave the factory at 3 a.m. every day, go home to sleep for 3 hours, and rush back to work at 6 a.m. "in order to catch up with the domestic demand for masks as soon as possible, everyone is very hard." Said Ju Daixia heartily.

On the one hand, Ju Daixia returned to work in advance, on the other hand, Ju Daixia sent an apology email to customers in the United States, Germany, Algeria and other countries in time. Several production lines that had been agreed to be exported as soon as possible were in breach of contract.

Ju Daixia said that the company still owes more than $6 million in total for the production line of diapers and sanitary napkins, which needs to be completed in nearly three months. But for now, she has to postpone processing these orders. "I sincerely mentioned in my email the epidemic situation in China and the urgent situation of the inventory of masks in China. I hope the other party can postpone the delivery date for at least one month." What Ju Daixia didn't expect was that none of her customers complained about it, which also encouraged her.

During the Spring Festival, the materials stored in the warehouse of the factory are only enough for 70 production lines of masks. At present, Ju Daixia needs to purchase materials and expand production capacity.

At present, the first batch of 15~20 production lines have been completed and need to be evenly distributed to mask factories in multiple provinces. "At that time, downstream enterprises will produce enough medical masks and ordinary masks to solve the" mask shortage "during the epidemic." Ju Daixia said with confidence